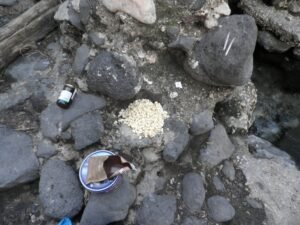 Eshu’s law (something like Murphy’s law) was heavy in the air, likely because I tried giving my Eshu doll vapor instead of smoke.  He did NOT like that.  So of course even though I was sure I had packed an extra camera battery for my trip to Tiberias, I had not.  So most of the photos did not come out well, but this one did.  Note, I gave him three whole cigarettes and got some good tobacco for him and all Spirits.  No more attempts to go high tech from me.  I learned my lesson, and thankfully, our offerings were accepted right away.

Something happened since the last time we went to Oshun’s spring.  Someone had rearranged the stones so that the outlet was almost dammed up, and redirected the flow in a very unnatural way.  The Spirits provide though, and two very sweet, strong men arrived.  They asked us questions about what we were doing, and we told them.  Then they asked why we were sad, so we told them.  So those beautiful men took it on themselves to put things back the way they were supposed to be.

The next day, we decided to do something a little different and went to a hot spring.  This particular spring in Tiberias has mineral salts and sulfur.  The chemistry was similar to some purification or protective salts that I mix, so I wondered what it would be like to be submerged in the Nature-made mix.  It was absolutely heavenly.  It was like being totally weightless.  Between the ashe and the physical properties of the waters, I understood something very important.  It is like the hand of the Mothers holding you up.

I can’t quite articulate it, but some of this vibration is going into this week’s workings.  I am still carrying some of this chemistry in my hair.

Link to this article: https://obeahwoman.com/Tygm1